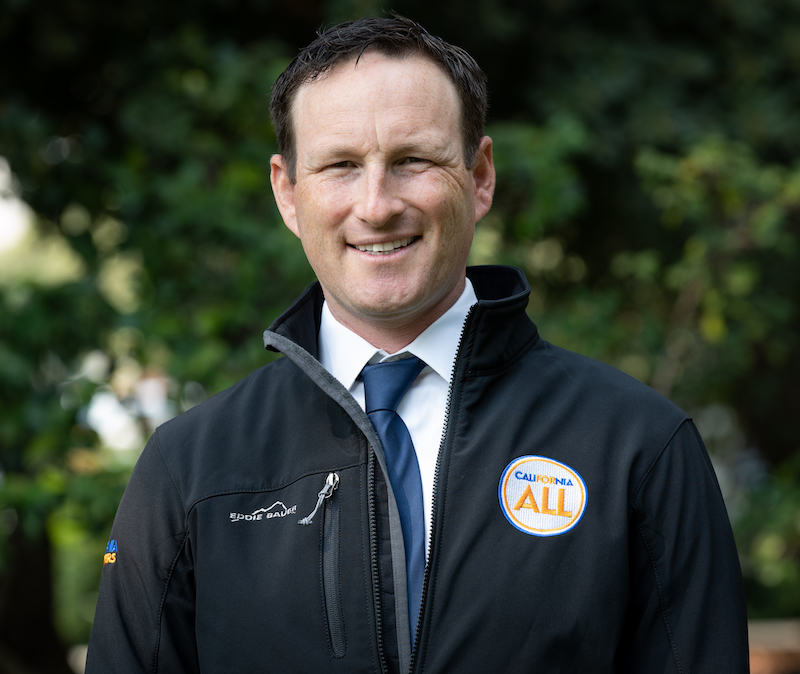 As a member of the Governor’s Cabinet, Fryday led the COVID-19 Task Force to support food insecure communities and food banks across the state. Since appointed, California Volunteers has launched the nation’s first statewide Climate Action Corps, #CaliforniansForAll volunteer initiative, a statewide Neighbor-to-Neighbor campaign, and the #CaliforniansForAll College Program to help thousands of Californians who commit to serving for a year pay for college.

Fryday is a military veteran and the former Mayor of Novato, his hometown. He also served as President of Golden State Opportunity (GSO), leading the expansion and implementation of the California Earned Income Tax Credit (CalEITC) and other programs to provide financial security to millions of low-income  people in California.  Prior to GSO, he served as Chief Operating Officer (COO) for NextGen Climate, a leading national organization focused on climate change.

Fryday served in the military as an Officer in the United States Navy (‘09-‘13) as a member of the Judge Advocate General’s Corps (JAG). He was stationed in the Office of Military Commissions, working on the Guantanamo Bay, Cuba detainee cases, and testified before the U.S. Senate Judiciary Committee on the closing of Guantanamo. He also served overseas in Yokosuka, Japan, where he augmented the Navy’s 7th Fleet’s Humanitarian Aid and Disaster Relief efforts during ‘Operation Tomodachi’ following the 2011 earthquake, tsunami, and Fukushima nuclear disaster.

In high school, Josh was a volunteer in the Dominican Republic with the Amigos De Las Americas Program. He received his undergraduate degree in Political Science and Philosophy from the University of California, Berkeley, graduating Phi Beta Kappa with highest honors. He later served on the UC Berkeley Alumni Board of Directors (06-09), where he co-founded the Equity Scholarship to increase the diversity of underrepresented students on the UC Berkeley Campus.

He currently serves as Board Chair for Demos, a national think-tank focused on issues of economic, racial and political inequality, and is a founding Board Member of Amazon Frontlines, a leading organization to protect indigenous communities and territories in the Amazon. He is married to Mollye Fryday, an educator, and they have three energetic young boys, Shay, Calvin and Tam.

Learn about the California Volunteers Commission