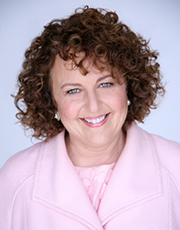 Wendy Garen, Vice-Chair of the California Volunteers Commission, is the President and Chief Executive Officer of the Ralph M. Parsons Foundation. Under Wendy’s leadership, the Foundation fosters healthy and vibrant communities in Los Angeles County by granting to highly effective civic and cultural, education, health, and human services organizations. Wendy serves on several boards, including the Center for Philanthropy and Public Policy at USC, Los Angeles County Commission for Children and Families, and Southern California Grantmakers, which she previously chaired.

As someone who has worked in philanthropy and now is the Vice Chair of the California Volunteers Commission (a Governor-appointed position), what opportunities do you see between the sectors that you might not have had before serving?

Well, I’ve certainly had the opportunity to see the importance of a Commission as it steps up to meet the needs of a community during disasters, and other emergencies the state has experienced over the four years I have been on the commission. That emergency response aspect and the coordinating of efforts are a unique role that is so important for the wellbeing of everyone in California. I think the other thing I would say is that this is just a new day in the state, and that there is a sense of coordination and sort of leverage between the public and private sectors – more of a willingness to work collaboratively to get things done. One of the places we can see that is the Commission’s work in the areas of foster care doing some special projects that increase AmeriCorps reach to serve kids who are affected by the child welfare system, and that’s being done in collaboration with community based non-profits. I think that is a very exciting thing that can really have impact.

You are approached countless times by nonprofits seeking resources – any simple piece of advice for those who are trying to seek funding from philanthropy?

The first thing would be to do all the research that they can on who they are approaching. It’s really important to go to funders that have already demonstrated an interest in the work that you are doing. For example, it wouldn’t be smart for someone to come to the Parsons Foundation to request money let’s say for documentary filmmaking because in the 40 year life of the Foundation we made 6,000 grants and only three of them had been for documentary films, and each one of those was a special case. What we want to do is encourage non-profits, because their time is their most valuable thing, to do research to go online to figure out what are the funder’s priorities. What they’re looking for is what I call the sort of Venn diagram of what are their needs and interests. What are they trying to get done in the community, and what is the funder looking to fund? You’re looking for where the fit is. So you know you don’t go to the hardware store to get milk and you don’t go to a funder that funds only drug diversion and ask for Head Start money.

We know you are excited about the Governor’s newly announced $20 million investment in AmeriCorps – what message does this send to the philanthropic community?

Well, I think it signals that the Governor understands that young people are an investment worth making, and I think it also signals that the Governor has a sophisticated understanding that the non-profit community creates well-being. So that combined investment in the well-being of the community and in young people and their futures I think speaks to the continued reinvestment of California as a dynamic place of opportunity. We are very excited about the potential collaboration between the public and private sectors under the Governor’s leadership.

Is there anything else you would like to include for our readers?

I would just conclude that it’s an honor and privilege to be part of this Commission, which makes such a real difference in the lives of Californians, particularly in the lives of disadvantaged young people. It really gives them work experience and a leg up. It is creating value in everyone’s life in California. It’s an exciting time to be a part of it.